A Product of Handworks

I was pleasantly reminded of my trip to Handworks in Amana, IA this week when I received an email from a man I met there, Doug.

I spoke with Doug for a while during the show. He had never used the type of tool that I make. He didn't know what they could do. In short order, he saw what he would be able to accomplish and was intrigued. Later, he won the door prize that I offered: a pair of #6s and a rabbet plane. He was very excited.

I was also happy because I knew the tools were going to a person that was interested in them and would use them.

Flash forward to this week--I received an email from doug with the following pictures: 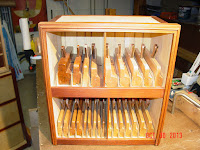 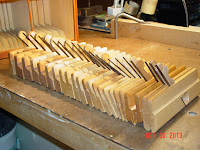 Doug has completed a half set of hollows and rounds, a pair of snipes bills and a pair of side rounds.

Well done!  (I bet his antique side bead and reverse ogee work great and were made to do so with only his newly acquired experience.)

Doug did it and you can too.

Thank you Larry and Lie-Nielsen.