This Thursday I will be driving to Cincinnati, OH for the LN event at Popular Woodworking.

Daed Toolworks, Czech Edge, Glen-Drake Tools, George Walker, SAPFM, and Jeff Miller will all be presenting along with Lie Nielsen and the staff of Popular Woodworking.

Here is a better write up than I will attempt.

All I will say is that I definitely do not have the time to make this trip. I forced it in my schedule. This show, with all the other presenters, is one I really want to attend.

I am going as a fan of the magazine but telling my wife that it's just one of those sacrifices one needs to make for a new business.

I won't be eating at White Castle this time. I will not make that sacrifice twice.
Posted by Matt Bickford at 9:05 AM 3 comments:

Read more »
Posted by Matt Bickford at 6:50 AM No comments:

Last week we laid out and executed a large bracket ogee foot for a PA secretary. Let's take a quick look at the crown. 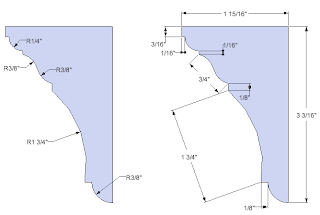