When cutting a rabbet greater than 60 degrees, in this case 90, the single rabbet cannot be upon the finished profile. The round will register upon the two point for the first cut, but not the second. You will have to rotate the plane immediately and then the round will only touch one point, which goes against everything I've taught.

In this situation you have a few options. The first is to start out with a rabbet that is much smaller. Plane down to the level of a single full with shaving, and then start rotating the plane.

In this situation depth and progress can initially be gauged off of the disappearance of the rabbet and then the size of the remaining fillets (the vertical and horizontal flats).
The second method, which is definitely recommended for larger profiles (for me starting around the size of a #10), involves cutting multiple rabbets. With this second method the vertex of the rabbets can again be placed nearly upon the finished profile and much more of the waste is removed.

As the profile progresses the plane will eventually have a surface against which it can register. Then it's just a matter of going to the finished profile that's been drawn on the ends.
As the profile gets bigger, the number of rabbets should increase. The problem that will arise is that as the number of rabbets increase the way that the plane is influenced by the points it follows becomes more difficult to calculate. Calculating this is time wasted. So...what is there to do with errant rabbets made in the name of '5 minutes'?

The round is not headed in the correct direction in the second picture above. Recognize this mistake early and correct it with a rabbet plane if you have difficulty steering. (note: I am often asked about rabbet plane width. I use a 7/8" for nearly everything...except this. This is when I use my 5/8" because it's smaller, easier to see and easier to fit.)

Then get back to work.
This applies to the chamfers used to guide hollows too. 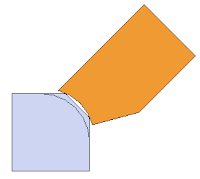 You'll be on your own to illustrate this.
There are a number of ways to use hollows and rounds. Look at a few, try a few and then practice. You'll find one that works for you. It may even be a combination. I never chamfer before using my #2 or 4 hollow, regardless of what I illustrate.

With the exclusion of mortising, the way you learn a skill or achieve early success is usually the way you'll be most successful. If you are efficient and accurate you are set. There is, however, always a better way to mortise by hand and it's safe to say that it's not the method you use so stop it, abandon it and find another yesterday.
Posted by Matt Bickford at 6:50 AM