I have been speaking to a customer that is in the process of producing John Townsend's famous chest. 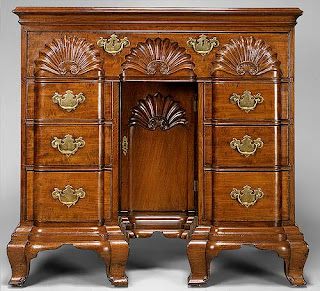 He has asked for direction and tooling in regards to the table's edge and support molding. He sent drawings of the two profiles. (Apparently he is building one along side a friend. The drawings were executed by his friend and have bearing locations illustrated for a shaper cutter. I wonder who will be done with the molding first--me or the friend?)
Table's edge

Rabbet Plane followed by a Rabbet Plane (for clearance).  (The orange Rabbet with a plow plane/chisel then rabbet would probably be first if I sold a plow.)

Side Round followed by a #12. The Radius listed for the cove was 1", which equates to a #14. I thought I would be able to create enough clearance to get the plane in there. I was wrong. I actually needed to take a few passes using the side round at an angle to knock down some of the red section third from the left in an effort to get the 12 in there and use as few planes as possible. Again, any facets left by the 12 are just scraped out, they are minimal. 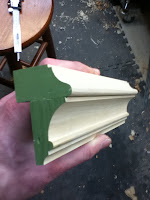 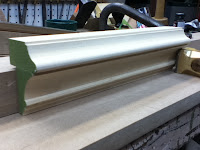 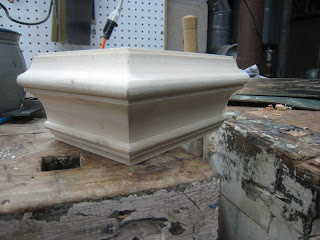 The lesson to be learned here is that you don't need to have a #5 to cut a 5/16 circle. You don't need a number 5.5 to cut an 11/32" circle. You can get very close by drawing the profile out on both ends and free handing it to completion What you see is off the plane, including the 1" radius cut with a 3/4" plane.
That being said, I very often wish for a 1 and 3 hollow.
Let's just hope the friend doesn't challenge me in seeing who can execute the carving first.
Posted by Matt Bickford at 11:42 PM