Rabbets: the good and the bad

One of my local customers, Philip, came over Friday afternoon for a little one on one help with his planes. (Philip is, strangely, the only person from Connecticut that has purchased planes from me.)

We talked about the general layout of profiles and purpose. Philip seemed to have everything down about which I have written. He wanted a cove and ovolo on the edge of some walnut for the base molding of a piece on which he is working.

After drawing the profile on a piece of paper Philip drew 3 of the 4 rabbets correctly. He only missed the small fillet on the outer edge, which could be added at the end once realized. 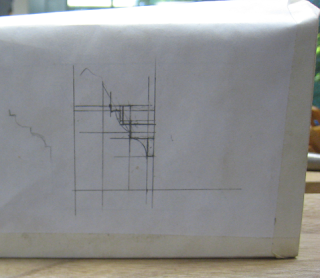 Getting the layout for this molding is probably 45% of the process. The next 45% is transferring that layout onto wood and executing the rabbets accurately. 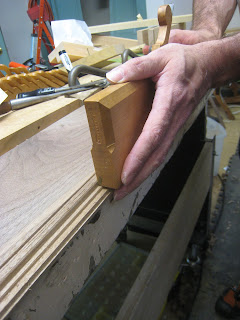 The remaining 10% is the work with the profiled planes. Once the rabbets and chamfers have been stuck (sticked? stack?...cut!) the final profile has, to some degree, been dictated--especially for beginners. About 10 passes with a #4 hollow and another 10 with a #6 round had been preceded by 100 with the rabbet. 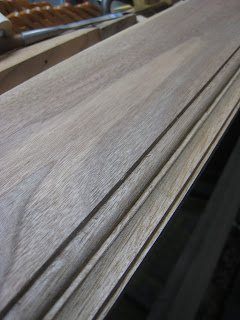 So, where was Philip having issues?

The iron's edge on a rabbet plane MUST project slightly from the body's side.

Here is a rabbet I just cut with the iron projecting about 1/128" from the plane's body. 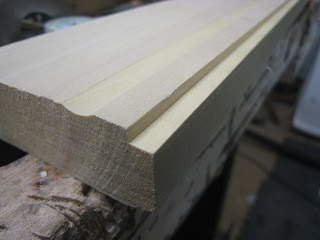 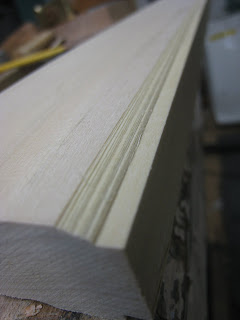 Do you see the difference? 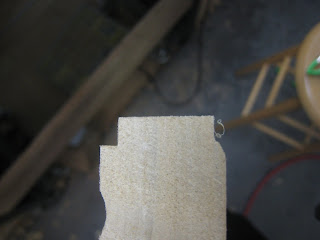 Any time a plane is intended to cut a vertical facet--rabbet planes, moving fillesters, side beads, ogees with fillets, snipes bills, dovetail planes (I've never actually used a good one), etc.-- the iron must project slightly from that vertical facet on the plane's sole. A fence will not fix this. The iron should project along these vertical facets but neither cut nor scrape.
Pop Quiz #1
Where must the iron project on the following three planes without cutting/scraping? 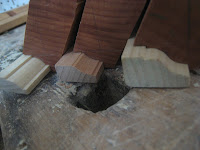 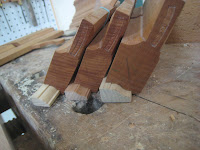 Pop Quiz #2
Have you been following the blog as well as Philip? Draw the rabbets/chamfers needed. 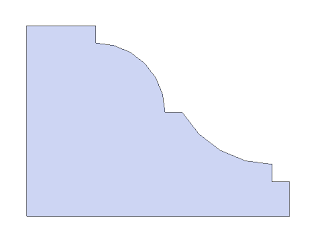 Are you just starting to read the blog and don't know anything I'm talking about? Please let me know if you need direction or if I should start from the beginning.
Posted by Matt Bickford at 8:22 AM