The SAPFM Mid-Year Conference was this past weekend at The Connecticut Valley School of Woodoworking (I will be teaching a class there regarding molding plane use at the end of July).

The three high points for me were as follows:
3. The slideshow of members' work. I thought it was truly fantastic and wished it was longer.

2. Yale furniture study/lecture. On Friday much of the group went on a field trip to Yale. It was the first time I had been on campus in 8 years and the first time I went to the furniture study. If you haven't been, and you're interested in period furniture, go. There are 1100 pieces in the basement of a building that are waiting for you to measure, photograph, and copy. It's incredible.

1. I have been to two Lie Nielsen Handtool events (30th Anniversary in a few weeks in ME, see you there) at Phil Lowe's Furniture Institute of Massachusetts. Both times I demonstrated next to the following chair... 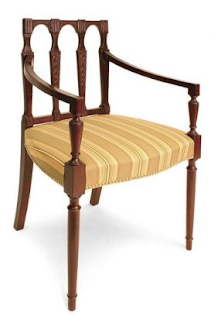 I saw it again this weekend. I think it's my favorite piece of furniture. I can not keep my eyes off of it. You just need to see it.
To the point of this blog...
I demonstrated my wares after the conference at CVSW to those who stayed around. Much of the weekend focused on New England furniture and I wanted to stay on topic to some extent. There were many references to Chapin throughout the weekend--we saw two of his highboys. Will Neptune, one of the demonstrators, even did a demonstration of some of the carvings. 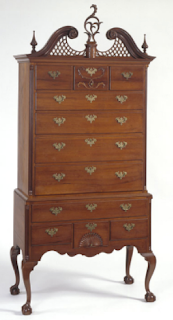 While at the Wadsworth Museum I tried to memorize the Chapin crown. Let's take a look. (Again, this was done from memory.)

#6 round followed by rabbet and #6 hollow

Complete
I milled the rabbets for this example before the program started on Sunday. I completed this profile during the demonstration time with the help of a few conference participants. 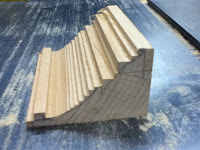 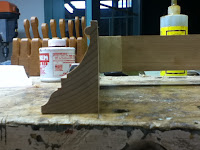 What set's this profile apart? Notice that large fillet in the middle of the profile. What do you suppose is its purpose? 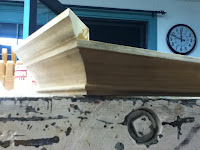 That point is a transition. The bottom portion of the molding continues around the chest uninterrupted with that large fillet acting as a faux top for the case. The ogee and small fillet along the top turns up on the case's face into a gooseneck that ends in a rosette. 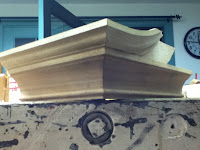 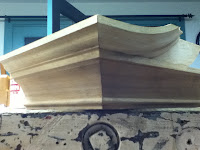 The gooseneck is carved and scraped. 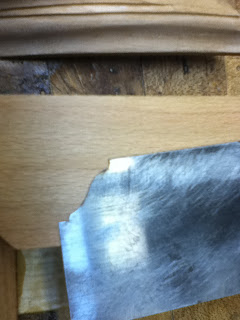 There's no question the following profiles are of similar size. You'll have trouble, however, with splitting the profiles in half for them to separate in front. 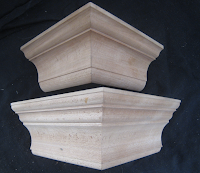 The beauty of hollows and rounds is that you don't need to make that sacrifice...These three profiles, all of which are very different, share 3 planes.


See a molding, make a molding
Posted by Matt Bickford at 1:24 AM