I've been away from the shop for several days. Even when I'm away I find it hard to escape. 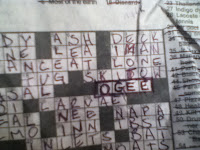 True Story: the very last crossword puzzle I did before this one was on a Southwest flight back from a Lie-Nielsen event in San Diego. (I am certain that I was the only person traveling with a checked bag full of poplar offcuts and another full of 30 sharp blades and a can of WD-40.) One of the clues was 'Planes, for example'. 5 letters. I had '-oo-s', but wasn't certain about the second 'o'. The ride was coming to an end and I had to look at the answer key...'TOOLS'. I didn't get it. My wife laughed in my face when I told her. I had 30+ of them in my luggage but I was on an airPLANE and I couldn't separate the two. I hate crossword puzzles. I'm just glad nobody knew.
-------------------------
There is often discussion of new planes vs. old. Let me make an argument for the old. They are out there. They are cheap. The hollows and rounds are nearly all serviceable. Here is a picture of my first #4 hollow. 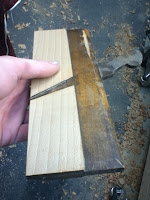 The body was warped SIGnificantly. Let me rephrase that: the body was warped SIGNIFICANTLY, probably 3/32". It works now. It cuts a 1/4" radius, but nowhere near 60 degrees.
In fact, all of the soles (matching pairs) in my original set needed to be addressed. Even the matched ones in G+ - G++ didn't come true. But that should be expected. 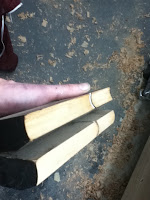 When profiled planes do have a true sole expect that the iron needs to be reshaped, not just resharpened. I have never purchased a profiled plane that only needs resharpening. These planes have been used properly for a few working generations and then sat or were mishandled for a century or more.
But they can work again. Don't let it stop you. Put your hand to the tool and then to your work. Whether you're using hollows and rounds to get from A to Z like I show you, from M to Z by altering your various shaper knives to get exactly what you want, or Y to Z to get rid of machine marks, you will be fulfilled. Put your hand to your work.
Do you not know where to begin? Get Larry Williams DVD Making Traditional Side Escapement Planes. There is so much information in there that you could nearly start your own business. Well, you couldn't, but...
----------------------------
1996 is nearly over. I've been pursuing customers for 9 months now and am wrapping up my first (abridged) year. Somewhere in the picture below is plane #400. 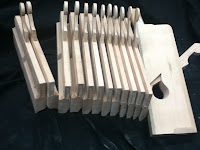 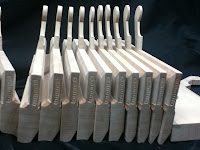 Woodworkers, and mugals alike (I swear I never read Harry Potter and that wand is definitely not mine), often hint at the idea of an impending boredom in making planes everyday. There are a few things that keep me going.
1. Wood is awesome and sometimes it all comes together perfectly 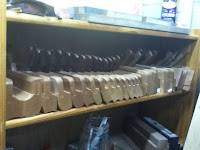 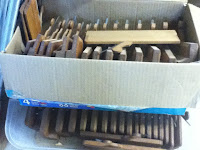 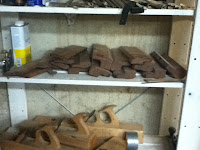 (not the ones on the bottom)
5. I have a stable of about 30 albums that I've been listening to for 15 years of which I canNOT get enough.

So here's to 1997...My resolution is to prove all of this to you. Thank you for reading.

Wait, what year is it?

Posted by Matt Bickford at 1:25 AM