Ever since I moved to Connecticut I have enjoyed bringing my kids to KidCity in Middletown. The place is exceptional. Let the kids run around while you get lost in the amount of detail in every corner of every room. I have spent hours in the basement sitting on a bench and staring at the walls.

The following pictures were taken in one room and show upwards of 10% of the detail. It's amazing. 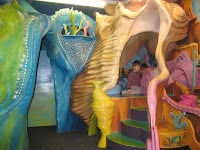 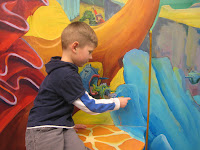 Thaddeus hidden on the left. Sheldon on the right. 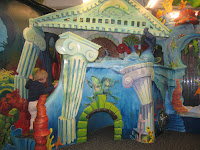 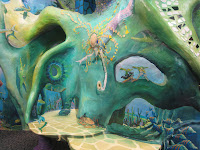 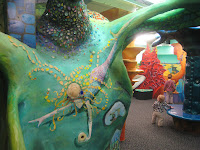 Roger on the right
To the point...I had just finished swimming one morning last year at the local YMCA when another man struck up a conversation with me. He saw a 'Y' insignia on my bag and asked if I went to Yale. I said yes and asked if he had a connection. He graduated about 10 years before I did.

I asked what he did for work and he smiled. He said he was a furniture maker. I laughed and told him what I do. It turns out that he, Ted Esselstyn, spent 6 months in the room above constructing and painting. He is a doctor turned carpenter turned furniture maker, an artist the whole time. Check out his site above and spend some time in the gallery (there's a lot of furniture at the bottom).

We've since met for coffee a few times and have been to each others shops a few times, too. Ted is currently starting a business called City Bench. In their words:

"City Bench grew out of our passion for building beautiful objects with meaning, soul, and a story. It also grew out of a reverence for the trees that line our streets, fill our public spaces, and enliven our campuses. Those trees represent our shared space and common stories - they are also a vital and overlooked resource.

"There are over 70 billion trees in U.S. metropolitan areas. New Haven removes more than 600 trees each year, New York City fells 7,000, and hundreds of thousands more come down across the country. Most of these grand, historic trees are relegated to the landfill, ground into mulch, or chopped into firewood each year.

"We extend the life left in those trees by building uniquely hand-crafted furniture that tells their stories. Community and connection to place are built into everything we create - whether that community is a big city, a small town or a much-loved school. Each piece bears a "birth certificate" describing the tree's origin, significance, and story. Our aim is to build a meaningful and lasting enterprise, which creates positive environmental and social change, and contributes to the vitality of the communities in which we operate."


Pretty cool stuff. Have a happy Friday!
Posted by Matt Bickford at 6:41 PM