A Successful Weekend in Saratoga

I shared a booth with Raney Nelson of Daed Toolworks this weekend in upstate NY. Raney brought several tools that seemed to catch most people's attention and interest. They always catch mine. 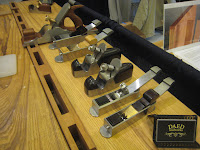 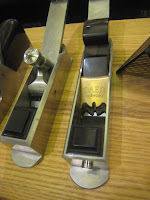 When Raney leaves the booth I get the opportunity to put these planes in many hands. These passersby are always shocked by the seemingly nonexistent mouth. They tell me I do great work. One of these days I'm just going to smile and say 'thank you.'

Don, Chris Boule and I got back from Saratoga late Sunday evening. It was a successful weekend: Woodworking, woodworkers, a display of great benches, great lectures (I'm told by many), Crabcake sandwiches, cab rides that were a little late, and, much to another Chris' chagrin, a couple of cans of PBR.

I received an award for  'professional excellence' for a cherry set of planes that were supposed to be delivered two weeks ago. (Thank you, Dan) 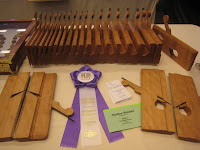 Chris received an honorable mention for his highboy. Every time I went into the gallery there was a small gathering around it. It was hard to walk away. 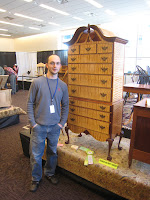 Don first received a 'professional excellence' ribbon for his tea table only to have it replaced by an award for being runner-up for 'best in show'. 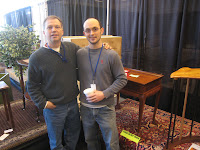 I am always adding moldings to my display as I fire through these blogs. Apparently the display was so appetizing that I had a few people approach me to place an order for several feet of one molding or the other. 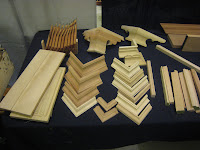 These people didn't seem receptive to the idea of doing it themselves at my bench for the next 15 minutes. I guess they assumed that what was being sold was on the black tablecloth and not next to the can of WD-40 on Big Pink. (Right there, behind the coffee cup.) 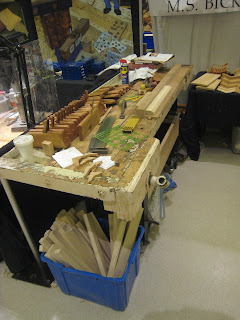 Not the first time...
The Haddam Neck Woodworkers' Guild has big plans for the competition next year. Come ruin them!
Posted by Matt Bickford at 8:03 PM